Listen to melody composed and performed by me for PINTOR Magdalena Kubik company. 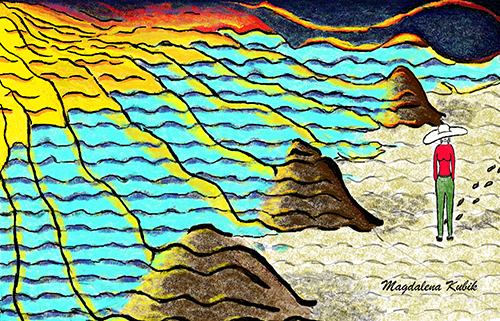 welcome to my place!

My name is Magdalena Kubik. I come from Poland and I am a dynamic women taking up some new challenges, to which I’m trying to deal with ambition and professionalism. Once my friend burst out laughing when I said showing him twice my age, hand made of wood, overworked but still not broken and with all teeth hay raked, that this is a technology that fascinates me. It was, when after several years of my scientific and professional career I decided to open business engaged in craft and everybody was observing my progress.

From past to future.

I spent about 10 years of my life working for corporations. I was an accountant in large and multinational companies such as Philips, 3M, Bayer, Young and Rubicam, Metro Group. Most of the time I spent working on complex projects like migration of financial processes, implementation of finacial and accounting systems, financial processes improvements, accounts reconcillation, months and years closing completion, reporting. I was also working at KPMG’s tax advisory department and SDI Media’s HR department. Since 2015 I’m an owner of my company PINTOR Magdalena Kubik working simultaneously in most of the departments despite, for example, accountancy. I have found myself more comfortable in a situation I do not have to save money in the favour of saving time. I was forced by unclear circumstances taking place in the country of Poland in those days to finance my activity without external financing as for example the rules of granting of european subsidies forced in those days the disclosure of the invention before patent application submittion infringing patent law. When polish financial system had the symptoms of global crisis I managed to find great and profitable job in the United Kingdom to finance my patents spendings and my business. I’m a carer working for outstanding british company. I care for voulnerable and elderly people when I’m timely available. It was the challenge, due to the pandemic, to cope with the covid-19 working with elderly and vournelable people however infection control is just only one of so many areas I have to cope with in my profession. I’m expecting my business to become profitable enough I’m able to devote myself back to my passions in the nearest future.

I’m a master in finance and accountancy and I have finished postgraduate study concerning European and Polish corporate law. From 2008 year I have practicing science. During incomplete doctoral study at Warsaw School of Economics I found professor Richard Dawkins’ ideas implemented into economy and I had also recommended “The Selfish Gene” book to be inspired by. At that time I also read “The God Delusion” and “The Devil’s Chaplain” working on the economical model connecting macro and micro economy. After I left SGH, the basis of this model  I made in 2011 year, as a model explaining the role of symmetry in an asymmetric system, I consulted with professor Marek Kuś from The Polish Academy of Science who encouraged me to learn more about physics. I decided to start studying physics at the Warsaw University and give economy totally up. The concept of the model was stolen by Leszek Czarnecki -the polish banker – and the plagiarism of my article titled “Role of symmetry in an asymmetric system” occurred in his book. I’m so thankful to professor Marek Kuś for the time he took for the conversation with me contrary to professor Andrzej Nowak from Florida Atlantic University who didn’t reply even to my email.

Its all not only about the Economy that all Systems not only of the Contemporary States but all that have been ever created are different in the area the System affects needs of human nature. Until the system, that satifies all of the needs of human nature is created, none of them will be the best. In the case of deviation it must be defined, that in the perfect System, the best way to its satisfaction is its treatment.

For the first time.

Since I found that infinity of the value of pi number has its limit I have been working on mathematical tool that enable my calculation to be possible to done and next I will want to try to make the model of the Universe based on the mechanisms of light.

I would like to start with the presentation of my own point of viue focused on the idea of  infinity by the publication of my article concerning this area in 2022 year. In this article I will also discusse the infinity of pi number as the range of its value between 3 and 3 rounded to the third decimal place.

One of my most interesting thoughts was writen May 2, 2015 on Facbook directed to profesor Frank Wilczek: “Professor Frank Wilczek, I have readen in Wikipedia that the time dilation related to the speed (kinetic) “means that if someone is watching a rocket flying at nearly the speed of light, the events inside the rocket are slow (to an observer from Earth) – Time passes slowly inside the rocket. The person winging rocket would have made the same observation looking at the observer on Earth.” What is the impact of the time dilation observing the situation on Earth and rocket at the same time? Sorry if I’m too much curious.” and 2 comments:

First comment: “When e.g I look at the house with a real height of 7m from a distance of 1 km I see a house with a height of 0.5 cm and my neighbor sees my house in the same proportion but that does not mean that the real size of our houses has decreased. This is something like unuseful illusion for me and my neighbor that we see houses of our neighbor with a height of 0,5 cm. Of course it is better to see less then nothing but is this not similar to time dilation?”

The secound comment: “In my opinion, at speeds close to the speed of light there is no perceptible movement because of the almost lack of mass and therefore the displacement occurs only in time as the displacement in time of the stationary material point. I do not know what’s going on in the interval 0 < speed <299,792,458 meters per second of speed but in my opinion, journey through space does not affect the speed of time (to extend the time we need in one hour more then 60 places for minutes. There is no other way to lengthen or shorten the time and this is why speed of time is constant for me everywhere). The cause of the illusion of time dilation in my opinion can be some relation between motion and mass which can act for example as mirage.”

The third comment to my thought dated May 2, 2015 came to my mind recently as I came back to this thought due to the totaly different reason but I deducted on the basis of the conctent of my thought and its comments that if particle moving at the speed of light stands still the particle accelerating to the speed of light slows down and this is exactly what’s going on in the interval 0 < speed <299 792 458 meters per second of speed.

The fourth comment to my thought dated May 2, 2015 is that the thought contains grammar mistakes but, anyway, I’m very, very happy after 5 years of waiting I found the answer to my question Myself .

Recently my main activity is focused on my company’s, PINTOR Magdalena Kubik, development. I invent construction solutions of my company’s products, creat some arts, products, prepare my company for the cooperation with business partners, look for and win clients, etc. I have also invented KUBIK’s cube is going to be presented soon at collector space . More information you can find at this website. If you have any question please do not hesitate to contact PINTOR Magdalena Kubik company.

I kindly invite everyone to become my company’s client as well as my scientific contribution’s reader.